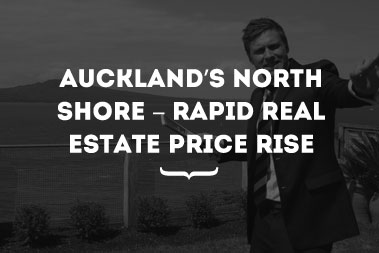 North Shore prices continue to rise at a rapid pace as outlined in the data released by QV!

It will be some time until supply catches up with demand & I’d expect price growth to continue over the next 12 months, however I don’t believe the growth to be at the at the same pace that we have seen in the past 12 months. Despite interest rate reductions, affordability is starting to become more of an issue for many Aucklander’s therefore reducing competition in real estate market.

Recently watching the reaction to a record price achieved for a first home style property in Glenfield,AT ONE OF OUR AUCTIONS neighbours who owned property nearby were ecstatic about the PROSPECT of what their home might be worth in the current market. Meanwhile a potential first home buyer not yet in the market WERE MISERABLE AT THE PROSPECT OF  how much they would have to pay to get in.  Same market just different realities!

I still believe the North Shore is a great place to live & the data is telling us it’s a great time to get into the market.

The data recently released by @QV has shown #Auckland house values have risen 20.4% in the past year to reach a new average current value of $874,851 up 5.6 per cent in the last three months!